Originally written for SWR’s Dokublog here is, addressed to our non-French readers, a brief description about radio documentary in France today.

According to my own perception and speaking only of contents, French documentaire is doing quite well.

After being reduced on public radio, feature keeps a 55 minutes daily afternoon slot (Sur les Docks) on the cultural station France Culture. It occasionally appears on other radio art slots on France Culture and, rather named reportage, on generalist station France Inter as well. Features on the public airwaves are usually produced by journalists: they would make interviews and tell the story with a commentary; there’s not much room for sound writing. However, when a producer develops her/his personal point of view, we then talk about documentaire de création or documentaire d’auteur. From time to time, more elaborate forms occur, which use sound as a descriptive or narrative element. Also actors’ voices happen to be used in order to add another level of narration, insert references through the reading of documents or excerpts of books, or even play a missing character, reconstruct facts, in one word: fictionalize, heading towards the docufiction genre. 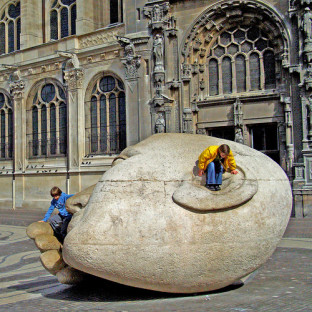 In the ear… (Kids in Paris) by Julie70 on flickr

On 1981-legalized community radio, feature has never been in the foreground since it needs time and training, two things that you haven’t got when you work on a broke basis. However it has always existed and, related to the free speech movement, it often deals with unconventional issues, gives unconventional people a voice. Nowadays feature on community radio (for instance: Radio Grenouille in Marseille, stations of the FRANF federation in the North of France, Jet FM in Nantes, etc.) is actually more well-known thanks to the internet and it seems to be growing.

Besides for less than 10 years, another player has acted an important role in feature in France: Arte Radio, a webradio on demand, set up by the French part of German-French public service television channel Arte. It’s been an unpredictable success, in particular from a young audience and people who didn’t listen to the radio before. Inspired by the short fiction film format, Arte Radio features have no predefined duration; they contain no commentary, no additional music, and great sound work. They are downloadable under a Creative Commons licence and many community radio stations have grabbed that opportunity to broadcast more feature. Like a feedback effect, it makes people want to do the same and Arte Radio has become very influential on the aesthetics of feature today.

In the same time, a handful of festivals highlight radio art and radio feature all around the country: Longueur d’ondes in Brest, Sonor in Nantes, Phonurgia Nova in Arles, Micro Clima in Poitiers, etc. Related or not, new collectives and non-for-profit organizations dedicating themselves to sound documentary production are born. They have their productions broadcast on community radio or on their own websites, or even organize listening sessions in venues for a live audience.

A young and very active association for the development of feature, ADDOR, do a great job in spreading the word about sound documentary in France. Most of their leading members are independent producers who work for public radio but it’s open to community radio producers, sound engineers, radio listeners and everyone who is interested in sound documentary as well. Thanks to the web, feature makers in France and in other French speaking parts of the world, especially Belgium (with players such as RTBF, ACSR and SilenceRadio, etc.), are more and more connected.

So lots of fresh and interesting initiatives to be followed!